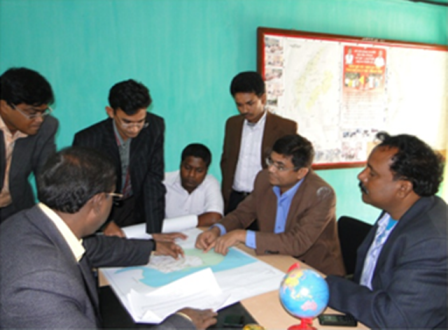 The objectives of the project were; 1) To prepare cyclone and storm surge hazard maps, 2) To prepare risk maps for the population and buildings, 3) To identify the potential locations for cyclone shelters and help in disaster mitigation efforts.

Cyclone storm surge modelling and mapping was carried out in Barguna district and three unions of the district were selected for a detailed study.

A pan-sharpened image prepared from ALOS/AVNIR-2 and ALOS/PRISM was used as a reference map and the village boundaries were demarcated using the participatory GIS approach. A questionnaire survey was carried out for collecting necessary information on cyclone damage for different household types in the study area. Wind speed data were collected from the Bangladesh Meteorological Department (BMD) for frequency analysis and corresponding wind speeds for 5, 10, 20, 50 and 100 return periods were 166, 205, 243, 291 and 327 km/hour respectively. Based on the bay configuration, tidal amplitudes and bathymetry, the entire coastal belt was divided into three zones and our study area falls into Zone-1. Wind speeds and storm surge heights in Zone-1 were found to be linearly correlated. The storm surge heights for 5, 10, 20, 50 and 100 years return periods were estimated as 3.1, 3.9, 4.7, 5.7 and 6.5 meters respectively. Storm surge hazard maps were prepared to provide the extent and depth in Zone-1for these return periods. A population risk map was prepared for each village in Zone-1 using the demographic data and the hazard maps. Similarly, a building risk map was prepared using vulnerability categories according to building types. Potential locations for cyclone shelters were also identified to help the concerned agencies in their disaster mitigation efforts. Potential causality maps for different return periods were also prepared using the demographic data and proximity of cyclone centers.