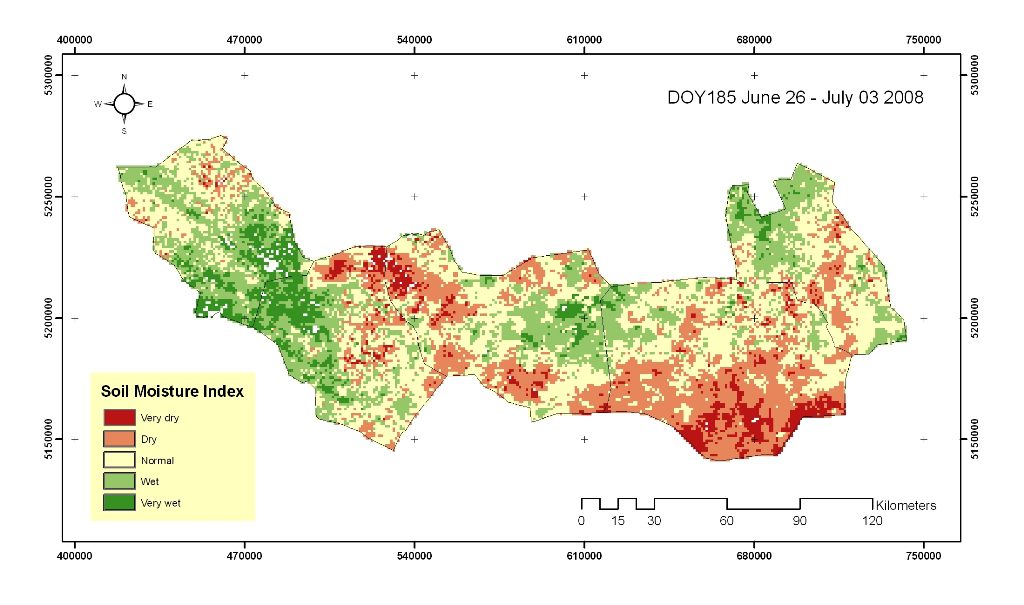 In this project, potential use of remote sensing for drought detection and monitoring in Tuv Aimag, Mongolia were investigated. Multi-temporal drought severity maps were produced from MODIS satellite data by using an empirical index called Soil Moisture Index (SMI).

MODIS 8-days composite products such as MOD09 (Surface Reflectance) and MOD11 (Land Surface Temperature) were used to derive the SMI. A total of 61 SMI images during the dry season of 9 years (2000-2008) were processed for drought monitoring purpose. On the other hand precipitation based drought index, known as the Standardized Precipitation Index (SPI) was also derived to compare the results.
Results showed that a drought condition in 2002 in the study area and the western part of the study area (Erdenesant and Buren) was drier than the eastern part (Bayan-Onjuul, Bayantsagaan, and Bayan). To verify the results, the relationship between SMI and actual precipitation, and its sensitivity to surface parameters were examined. It was found that the SMI followed a similar trend with the actual precipitation as well as 1-month SPI. Further, the SMI found to be closely related to Land Surface Temperature (LST), which could be useful to identify water stresses.