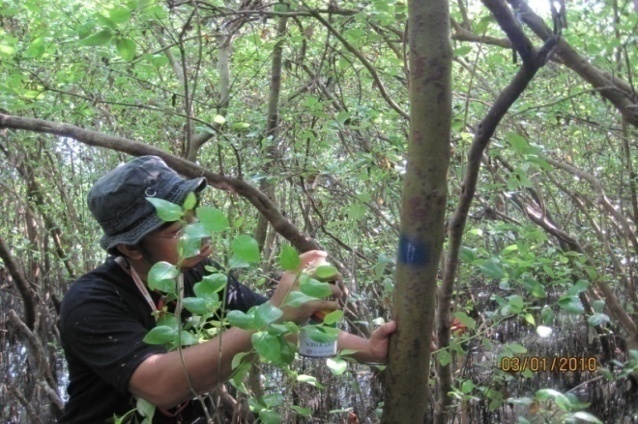 The objectives of this project were: 1) To delineate a landcover map of Bangpu Nature Education Center (BNEC) area, 2) To create a map of mangrove distribution and above ground biomass, 3) To detect changes in mangrove reforestation area.

The study area, Bangpu Nature Education Center (BNEC) is covered by mangroves forest, and it has recently been promoted as the center of natural resources, environmental learning and bird watching activity. ALOS/AVNIR-2 images of 2006, 2008, 2009 and Landsat-TM images of 1989 and 1994 were used for detecting changes of mangroves in the study area. Mangrove distribution maps were prepared and total mangrove areas obtained from supervised classification using ALOS/AVNIR-2 images of 2006, 2008 and 2009 were approximately 10 ha, 9 ha and 9 ha, respectively. Since the establishment of BNEC in 2003, the mangrove area has been increased. Pan-sharpening technique was used for delineating mangrove boundaries and landcover features and it was found to be very useful. This study used a measure of greenness as a means to estimate biomass. Greenness was estimated from Normalized Difference Vegetation Index (NDVI). A linear model was developed to examine the relationship between NDVI and biomass content and r2 value found to be 0.426.