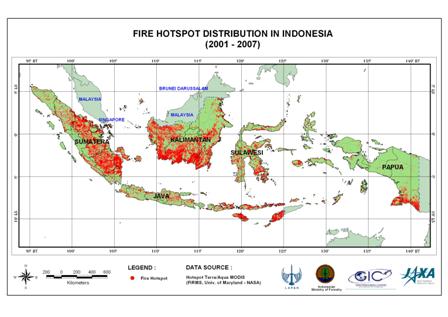 The project aimed at developing a relationship among several physical parameters responsible for forest fire occurrences such as rainfall, vegetation greenness etc.
The study area, Central Kalimantan province is one of the worst forest fire affected provinces in Indonesia.

Fire hotspot distribution data from 2001 to 2007 in the province was available for the study area. Satellite data such as MODIS, ALOS/AVNIR-2, Landsat-ETM+ were used for landcover classification and assessing the vegetation greenness in the study area. TRMM data was used for the rainfall estimation which was verified using the actual rainfall data collected from the provincial meteorological station in Palangkaraya from 1998 to 2007 and both the datasets showed the same trend. The fire hotspot data were also verified by comparing with high-resolution satellite imagery such as ALOS/AVNIR-2 and field survey. The El Niño/Southern Oscillation (ENSO) event was considered while analyzing the data and it had showed significant influence to rainfall causing drought and consequently wildfire and haze in the region. The relationship between rainfall and the fire hotspot was analyzed based on the time series of monthly average rainfall and number of hotspots. The result shows a negative relationship between rainfall and fire hotspots as expected, particularly during the years of El Nino. Time series analysis of monthly average Enhanced Vegetation Index (EVI) and number of fire hotspots in Central Kalimantan province from 2001 to 2007 was conducted and it was further analyzed using the rainfall data including El Nino periods. Further, the fire hotspot occurrences with respect to landcover classes was conducted using the high-resolution satellite imagery of ALOS/AVNIR-2 of 2008, Landsat ETM mosaic of 1999-2001 and landcover map of 2001. The result shows that in 2001 most of fire hotspot occurred in plantations, shrubs, primary forest and bareland.