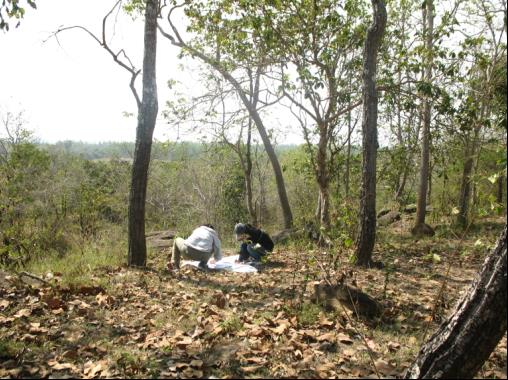 The objectives of this project were: 1) To analyze the differences between GPM-TRMM precipitation and observed values in the study area, 2) To analyze the differences between SMI values retrieved from remotely sensed data and observed soil moisture in the study area, 3) To delineate landuse/landcover map of Darkhan-Uul aimag region.

The study area, Lam Phra Phloeng watershed is one such example in the north-eastern part of Thailand where agricultural land in the area is losing productivity due to high rate of soil erosion and affecting marginal farmers adversely. ALOS/AVNIR-2 images of 2006 and 2008 were analysed for change detection in the study area, however no significant landuse change was found in the watershed due to short span of time. The main landuse types in the area were agriculture, dry evergreen forest and orchards. It was found that the small size of plantations were difficult to identify with ALOS/AVNIR-2 images and such small patches were extracted by on-screen digitization. The USLE model for estimating soil erosion requires parameters, namely, rainfall (R), soil erodibility (K), slope length (LS), vegetation cover and management (C) and support practice (P). Annual mean rainfall from 23 rain gauge stations available around the study area was used to estimate the value of R. The K-value was obtained from the nomograph method calculated by the Land Development Department (LDD). Contour interval at 20m was used to generate DEM for calculating LS-value. Landuse map obtained from ALOS/AVNIR-2 provided the information of C- and P-values. The E30 model is mainly governed by an annual rate of soil erosion at 30° slope and vegetation cover. ALOS/AVNIR-2 images of 2006 and 2008 were used to calculate the Normalized Difference Vegetation Index (NDVI) for obtaining the vegetation cover, while slope factor was obtained from DEM. USLE had estimated higher soil erosion rate in the watershed whereas E30 model estimated low erosion rate which is close to reality. However, there are limitations of using E30 model as it requires actual measurement of annual soil loss (mm/yr) in the study area under different landcover and landuses.