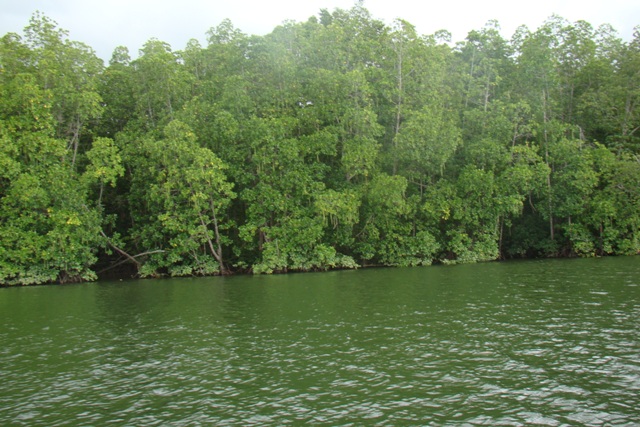 The objectives of this project were: 1) To delineate the mangrove and aquaculture farms from remote sensing data, 2) To detect changes of aquaculture development in the mangrove areas over the past 20 years, 3) To develop a spatial database of mangroves for Tawau and Tuaran districts.

The two study areas, Tawau and Tuaran districts are located in Sabah province of Malaysia. ALOS/AVNIR-2 image of 2008 and Landsat-TM image of 1989 were used for detecting shrimp farms and changes in mangrove areas in the Tawau Merotai area, while ALOS/AVNIR-2 image of 2008, ALOS/PRISM image of 2007 and JERS VNIR-1 image of 1998 were used for the Tuaran area. Visual interpretation was carried out to detect the change in both of the study areas with help of the collected field data. Landuse and landcover map prepared from ALOS/AVNIR-2 was superior than the one obtained from the Landsat-TM or JERS VNIR-1 image.  However, for clear boundary of shrimp ponds there was a need for pan-sharpening the ALOS/AVNIR-2 image using ALOS/PRISM data. Total classified areas of mangrove forests in Tawau were 4,310 ha in 1989 and 3,364 ha in 2008, while in Tuaran it was 1,515 ha in 1998 and 1,230 ha in 2008. The decreasing trend of mangrove forests in the two study areas was thus quite obvious, however, their pattern of change was complex. Conversion rates were estimated at about 22% (946 ha) in the 20-year period between 1989 and 2008 for the Tawau area, while it was about 19% (285 ha) for the Tuaran area. There is a need for establishing a good database for monitoring change dynamics in the study area which will help in better management of the remaining mangrove forest reserve areas and a Web-GIS portal has been developed for this purpose under the project.