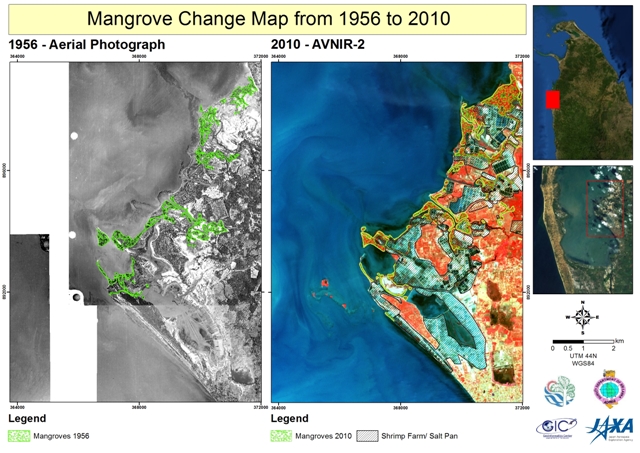 The objectives of the project were: 1) To update the mangrove distribution map using ALOS/AVNIR-2 data of 2010, 2) To identify changes/degradation of mangrove ecosystems in North Western and Northern provinces during the past five decades.

In the Northern and North-Western provinces of Sri Lanka, mangrove forests are degrading due to population pressure and shrimp farming in surrounding the lagoons, especially in Mundal Lake and Puttalam lagoon. ALOS/AVNIR-2 images of 2010, Landsat-TM images of 1999 and 2000, and aerial photographs of 1956 were used for mapping and change detection of mangroves in the study area. Pixel based, unsupervised and supervised classification techniques were used for identifying the landuse and landcover classes including the mangroves. It was quite difficult to separate mangroves from other forest types due to very similar response in the spectral domain. Ground-truth verification with geo-tagged photos was carried out in order to facilitate the supervised classification. ALOS/PALSAR FBD, dual polarization images were also used to generate RGB color composite image with HH, HV and HH/HV combination of forest/non-forest classification. Results from multi temporal satellite data analysis showed that there are significant changes in mangrove areas during the study period. During the study period from 1956 to 2010 the degraded and stable mangrove areas were identified.