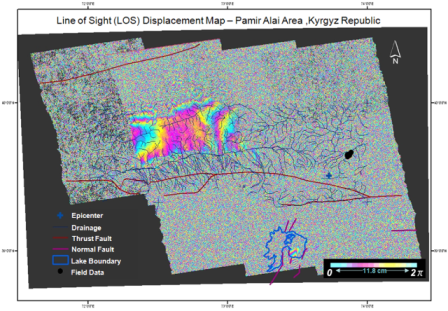 The objectives of this project were: 1) To generate interferogram using ALOS-PALSAR single look complex data, 2) To create a displacement map by removing the simulated topographic related phase generated from the SRTM digital surface model (DSM), 3) To compare the produced displacement map with available fault data
Pamir-Alai area of Kyrgyzstan was hit by a 6.6 magnitude earthquake on October 6, 2008, and followed by two aftershocks of magnitude 5.7 and 5.1.

After the earthquake, cracks of 1 to 8 cm width along Irkeshtam road were found and it was assumed that deformations had occurred in the surrounding areas of Pamir Alai Mountain. In this study, the co-seismic deformation in Pamir Alai region was investigated by using the DInSAR technique. Twenty two ALOS/PALSAR images were acquired and 30 interferometric pairs were processed by using ENVI-SARscape software package (Version 4.2) and best pairs were selected for interpretation. The raw interferogram generated from 2 different SAR images consists of following phase components: phase due to ground deformation, topographic phase contribution, phase delay due to the impact of atmospheric and phase due to noise. Assuming that the phase due to deformation and topography are the predominant causes, an approximate value for the deformation was obtained by subtracting the simulated topography generated using SRTM-DSM. After overlaying available fault data on top of the filtered and geo-coded differential interferogram, it was found that the obtained differential fringes were matched with the available fault data in Pamir-Alai region. Major deformation was observed in North-West direction from the epicenter showing 48cm Line of Sight (LOS) displacement of uplift and 17.7 cm LOS displacement of subsidence. The regions where differential fringes were found also showed the presence of a reverse thrust fault and normal faults around the epicenter. The reverse thrust fault is situated below the epicenter, lying in SE to SW direction while the normal faults are observed in SE and SW directions from the epicenter. The presence of differential fringes in the vicinity of faults around the epicenter can be considered as deformation but needs verification with ground-truth including GPS and seismological data.