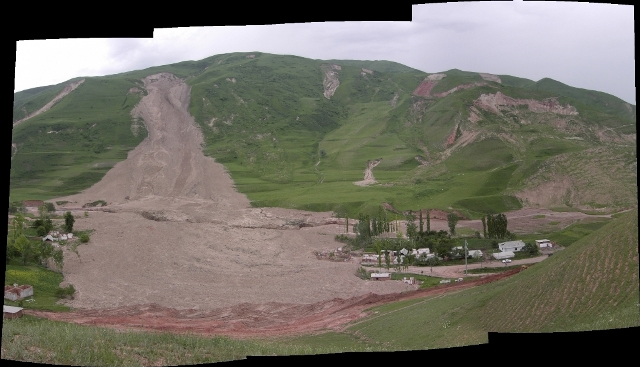 This project aimed at analyzing the potential use of ALOS/PALSAR L-band data for mass movement monitoring due to landslides.
Osh province in the south-west of Kyrgyzstan is considered to have a high frequency of occurrence of landslides. In this project, interferometric processing was performed to monitor mass movement due to the landslides.

Two complex SAR images taken from slightly different positions by the same sensor at two different times combined and differenced in phase, form a radar interferogram (InSAR) enables to extract information about the earth’s surface. In order to retrieve Line-of-Sight (LoS) surface displacement, topography-related phase has to be removed from the interferogram by using a Digital Elevation Model (DEM). A total of eighteen ALOS/PALSAR level 1.0 images starting from year 2007 to 2010 were used in this project. Seven InSAR pairs were processed using SarScape software assuring that the perpendicular baseline was less than 250 m. The raw PALSAR scenes were processed to Single Look Complex (SLC) images in the zero-doppler coordinate system in order to simplify the interferometric processing. Generated interferograms were filtered using Goldstein filter to improve fringe visibility and reduce noise introduced by temporal or baseline related decorrelations. Landslide catalogue data from the Ministry of Emergency Situations were used for interpretation. The analysis of processed interferograms showed a very good coherence over mountainous and vegetated slopes even when the temporal resolution was more than two years in some cases. The best result was achieved over combination of data from February and May 2008. The subset area of the processed interferogram clearly showed the landslide bodies and a slight deformation from 6-8 cm. Moreover, the results were compared with Terra SAR-X data and found that the coherence was better in ALOS/PALSAR.