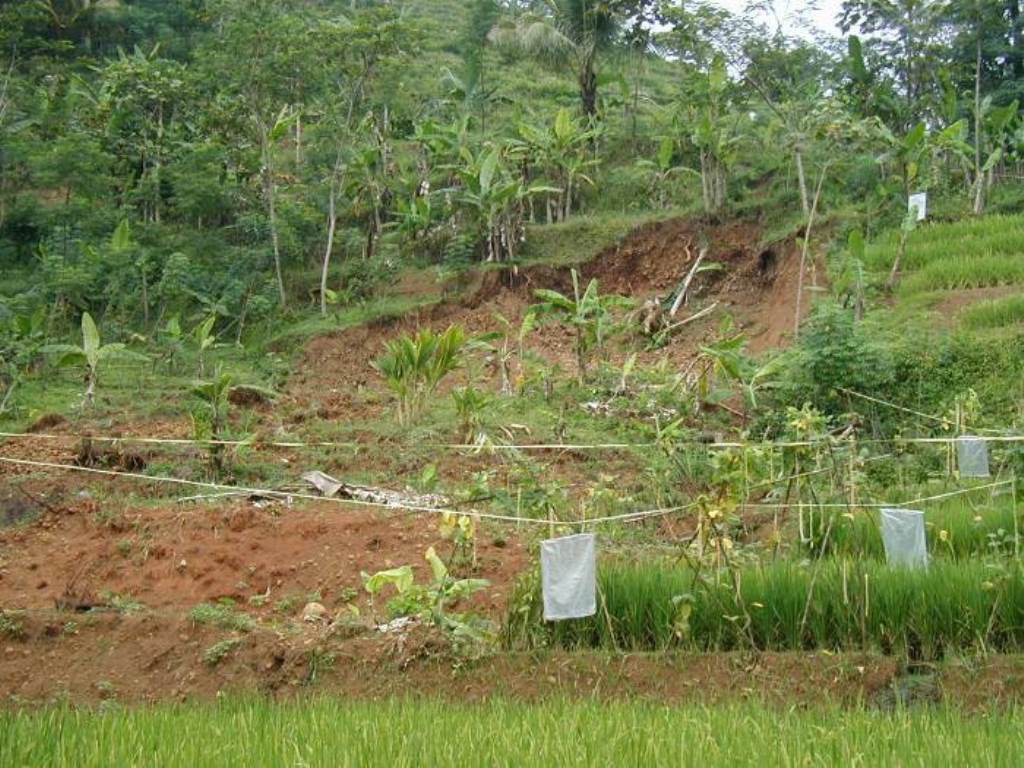 The objectives of this project were: 1) To explore ALOS satellite data for identification of landslide points, 2) To assess landslide susceptibility using a deterministic model called SINMAP, 3) To compare landslide map generated by the SINMAP model with the existing landslide map prepared from weighted overlay method, 4) To update the previous landuse/landcover map using the ALOS data.

The two study areas, Malang and Blitar districts are located in the upland horticultural areas and having frequent problem of shallow landslides which are often caused by the intense rainfall in agricultural lands with high slopes. A deterministic slope stability model called SINMAP (Stability Index Mapping) was used to address the landslide problem in these areas. Landslide inventory map is one of the important inputs to the SINMAP model and past landslide points were successfully extracted from ALOS/PRISM and ALOS/AVNIR-2 images to produce this map. These landslide points were later used to calibrate and validate the model. A Digital Elevation Model (DEM) derived from ASTER data was used for running the SINMAP model as other good quality DEM was not available for the study area. Geotechnical data necessary for the Model were obtained by testing the soil samples collected in the field. Accumulated daily rainfall data for 10 years were obtained from TRMM (Tropical Rainfall Measuring Mission) satellite products. Malang and Blitar districts were divided into 7 and 5 calibration zones respectively, depending upon the soil type, texture, and geotechnical parameters i.e., areas having similar geotechnical and hydrological parameters were grouped together. Slope stability index maps were produced by using the SINMAP model for both the districts and model validation was carried out using the landslide inventory data obtained from the ALOS images, and it was compared with the existing landslide susceptibility map prepared by using the Weighted Overlay method. The relationship between landuse and susceptibility classes was also examined. High vulnerability was found in upland food crops (22.5%) and mixed tree crops (16.7) in Malang district, while for Blitar districts it was found in forest (58.3%) and mixed tree crops (15.2%) %). The model was calibrated to test the sensitivity of stability index by changing the geotechnical parameters (cohesion and friction angle) and hydrological parameters (transmissivity and effective recharge). The stability index found to be more sensitive to cohesion in comparison to transmissivity, effective recharge and friction angle.