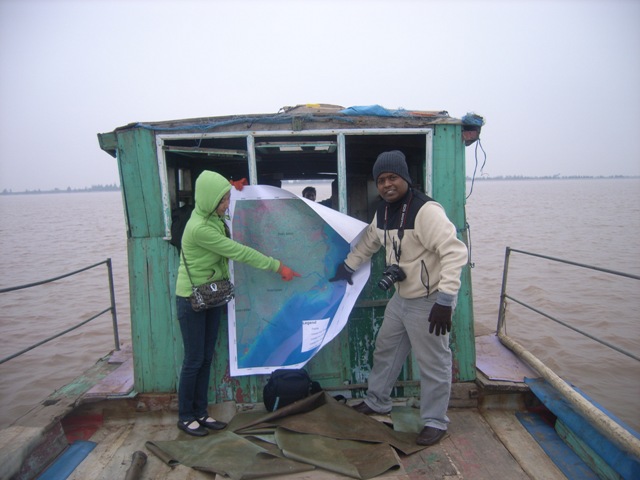 The study area is located in Red river delta area, a flat area with 130 km coastline that intensely developed and densely populated area. The coastal changes that are prominent in this area were characterized by the phenomenon of erosion, deposition and sand bar movement. Satellite images of ALOS/AVNIR-2 and Landsat, were used for the monitoring of coastal morphological changes over the period of 1975 to 2009. A panchromatic band of Global Land Survey 2010 (GLS2010) orthorectified LANDSAT data set was used as a reference image for image-to-image registration of the other satellite images. ALOS/AVNIR-2, Landsat7 ETM+, Landsat5 TM and Landsat2 MSS satellite images were used to extract coastline of year 2009, 2001, 1989 and 1975, respectively. Band rationing and applying threshold technique was used for the coastline extraction. Tidal levels at the time of image acquisition varied from -0.89m to 2.87m. Therefore, coastline from another image at a different tidal level in the same year was considered to get the corrected coastline by interpolation technique. Points were extracted along the coastline that was generated from the 1975 image and were established as the reference points to see the change with later periods. The changes were measured in the Euclidean distances from these reference points. Positive values represented deposition to the sea and negative values represented erosion. From the analysis, it was found that maximum erosion was 23 m/y between 1975 to 1989 in GiaoThuy, Nam Dinh area.
Human activities like shrimp farming and mangrove cultivation have influenced the expansion of the land into the sea. There have been depositions of nearly 3.5 km in Red river mouth and 2.8 km in Thai Binh river mouth from 1975 to 2009. The sand bar movement of the Deltas was characterized by their alternating location, rate of deposition and erosion. In the analysis, sand bars were converted into lines and centerlines were extracted manually. Then the change of the centerlines was observed from 1975 to 2009. It was found that they moved 186 m/year in Red river mouth and 195 m/year in Day river mouth. ALOS/AVNIR-2 and Landsat images were classified and changes were calculated in three time steps. Finally, all the raw and processed data and results were compiled in Geodatabase.