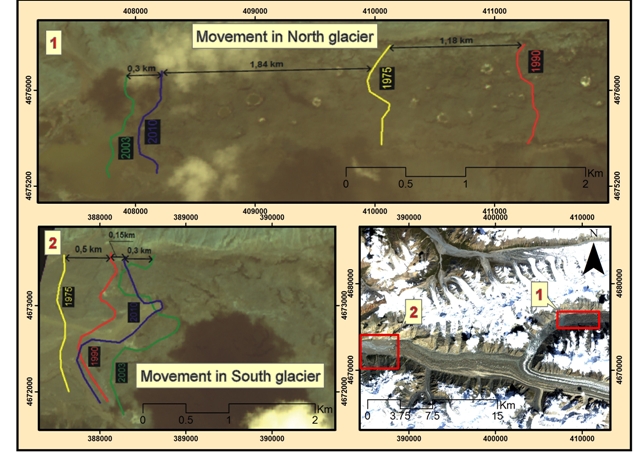 The objectives of this project were: 1) To monitor the Mertsbaher lake development, 2) To find a relationship between temperature and the lake outburst, 3) To estimate the glacier movements and velocity.
The Merzbacher Lake in the Inylchek Glacier bursts out with a flow up to 1000 m3/second due to ice movement during the summer and autumn period and formations of cracks in a zone of unloading of the Southern Inylchek Glacier.

MODIS 8-day composite from year 2000 to 2011 were used to get the surface temperature of the lakes and this was plotted against the outburst events. The MODIS temperature when compared with the field data showed a good correlation. It was found that the lake outburst occurs when there is a rise of temperature little above 10 degree Celsius and the frequency of outburst is more if it is near to 15 degree Celsius. For the monitoring of the lakes, images from 1943 to 2011 were used which includes aerial photographs and satellite images such as ALOS/AVNIR-2. All the images were first geo-coded using the topographic maps of the glacier.  Band combination methods were applied on these images prior to digitizing the lake area for a clear boundary detection of the lakes from its surroundings. It was found that there is an increase of about 0.45 km2 of surface area of the upper lake from 1975 to 2010. ALOS/PRISM image of 2006 and bathymetry map were used to generate the DEM of the lake area when the lake was empty after an outburst. The volume of water in the lake was estimated from the DEM using a truncated paraboloid equation and an area-volume curve was generated. It was found that the critical areas for the lower and upper lakes before an outburst were 3.0 km2 and 3.58 km2 respectively whereas the critical water volumes were 0.06 km3 and 0.07 km3 respectively. ALOS/PALSAR images were used to identify the lakes after an outburst and the regeneration process thereafter. Landsat and ALOS/AVNIR-2 images from 1975 to 2010 were used to estimate the glacier movement as well as the velocity. The results revealed that the Southern Inylchek glacier tongue is quite stable. The movement of this tongue from 1975 to 2010 was 1 km. On the other hand, the Northern glacier tongue retreated about 1.18 km from 1975 to 1990 with 80 m/year, and from 1990 to 2003, the tongue advanced about 3.32 km with 250 m/year. It further showed that the North tongue was active till 2003 but now it is quite stable. The calculation of the velocity showed that the highest velocity for the period of 2006-2010 was observed in the upper part of the Southern Inylchek glacier which was about 0.30 m/day. Near the turn of the glacier, the velocity was a less (0.02 m/day). After the turn, the velocity reduced to 0.09 m/day. This was in conformity with the results obtained by Mayer et al. (2008).