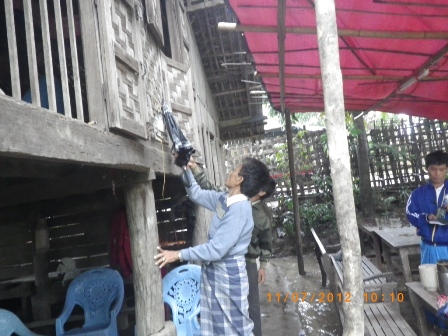 HEC-RAS model was used for preparing the flood hazard maps. ALOS/AVNIR-2 images were processed to obtain the most recent landuse and landcover information of the study area, which was used as an input to the model. ALOS/PALSAR images were used to know the extent of flood in 2007 and calibrate the flood model. The model results showed that the maximum flood depth was 5.0 meters in 2007. The flood map derived from the ALOS/PALSAR data found to represent a 10-years flood, which was close to 2007 flood event.

In order to know the population exposed to the floods of various return periods, a population density map was prepared at a 30 m x 30 m pixel size and overlaid with the hazard maps. It was found that a 500-years flood would affect nearly 47,000 residents in the study area. A field survey was conducted to understand the damage caused by the floods in recent years and damage curves were generated from the data collected through the survey. Interviews were conducted among the flood-affected residents in Homalin town to record the damages inflicted by floods. A flood of 500-years return period will inundate an area of 452 km2. This includes paddy fields with damages up to 90 % around the Homalin town.