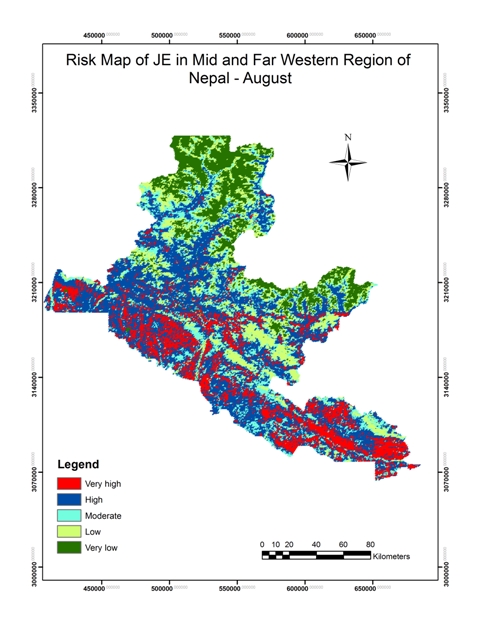 The study area is located in the twelve districts of mid-Western and far-Western region of Nepal where JE cases have been reported in large numbers in comparison to other parts of the country. The methodology had two distinct phases, data collection phase and data analysis and map generation phase. In the data collection phase, occurrence of JE cases and data related to factors influencing JE cases like temperature, precipitation and landcover were collected from Seti and Bheri Zonal hospital situated in far-Western and mid-Western region of Nepal respectively. TRMM 3B43 data were used to find average monthly precipitation of the five months from the years 2000 to 2009. Similarly, the MOD11A2 data were used to find five months mean maximum temperature for the same period. ALOS images were used for the landcover classification of the study area for the year 2010 whereas MC12Q1 products were used for the year 2000 and 2005. In the data analysis and map generation phase, statistical analysis based on multiple regression analysis was carried out to find out the correlation of dependent variable JE cases with independent variables temperature, precipitation and landuse to develop a model. On the basis of the model, final risk maps of JE along with five different levels of risk were generated. Risk maps of JE cases were developed for the months July and August using the model. The maps contained five levels of risk zones namely Very High, High, Moderate, Low and Very Low. At very high precipitation (more than 180 mm per month), the risk of JE was found to be low. The areas having high temperature and crop cover were more prone to JE.