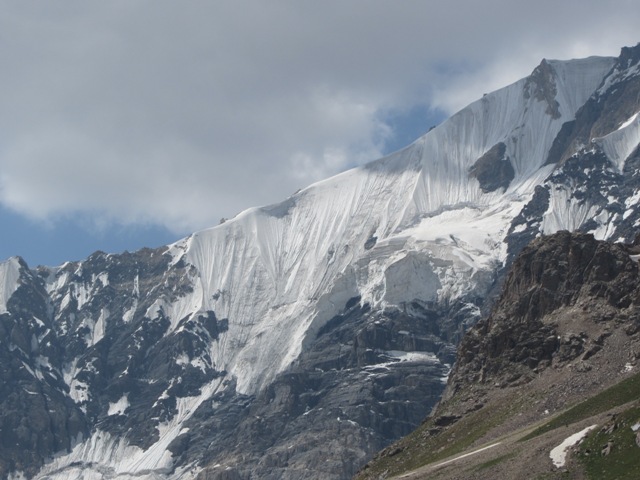 The objectives of this project were: 1) To delineate the extent of glaciers in the study area, 2) To define morphological characteristics of the glaciers.
This study has been carried out in two areas, 1) Pskem river basin in North and 2) Kashkadarya and Surhandarya river basins in South of the country.

The optical images (ALOS/AVNIR-2, ALOS/PRISM and Landsat) were used for the study area in the North, while the SAR images (ALOS/PALSAR) were used for the study area in the South. Satellite images were selected for the month of August when the snow cover is less in comparison to other months. Scanned maps of glacier inventory acquired in the 1960s were collected from the ‘Catalogue of Glaciers of the USSR (Union of Soviet Socialist Republics)’. These maps were used as the baseline information to locate the glaciers. In the Northern territory, 10m resolution AVNIR-2 images were pan-sharpened by using ALOS/PRISM images in order to achieve 2.5m resolution multi spectral images for visual interpretation in order to digitize the glaciers and snow covers. Furthermore, important features of glaciers such as firn lines, boundaries between accumulation and ablation zone were demarcated while visual interpretation was carried out. The morphometric characteristics of some of the identified glaciers such as type of glacier, elevation of the lowest part, highest part and firn line, general aspect, length, area of open part, area of ablation, total area of glacier were derived from ASTER DEM (Version 2.0). ALOS/AVNIR-2 and Landsat images (1997 and 2002) were used to classify snows and glaciers. In southern territory, several attempts were made for terrain correction of ALOS/PALSAR images through freely available software tools and algorithms (ASFMapready, NEST and PolSARPro) but processing was not successful due to complexity of terrain and quality of available DEM.
Results show existence of 167 glaciers in the northern territory in 2010 covering a total area of approximately 59 km2. With reference to the 1960 inventory, there has been a decrease of nearly 20 square kilometers in terms of area, but 20 more glaciers were found. This is perhaps due to the fragmentation of glaciers of the 1960s.