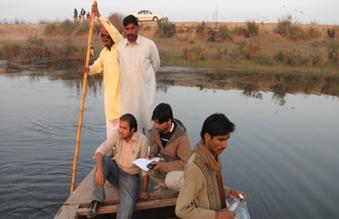 Smooth coated otter (Lutrogale perspicillata) is one of the two species of otters found in Pakistan, the other being Common or Eurasian otter (Lutra lutra). It occurs along the Indus and its tributaries in Punjab and it is reported as near threatened. Data and information on the occurrence and distribution of the smooth-coated otter was collected from previous field survey reports conducted by WWF – Pakistan and from a recent field visit conducted under JAXA funded project with 1:25,000 ALOS satellite images. The study was carried out at two levels, coarser scale by MODIS data and finer scale of ALOS data. Based on the identified key habitat features several GIS datasets were prepared with existing data layers and sighting data such as wetness index, NDVI, NDSI, NDWI, LMI, temperature, rainfall and distance to water masks and settlements. A software called Maxent was used for the habitat evaluation of smooth-coated otter at coarser scale. Development of an accurate landcover map has a primary importance in habitat mapping of fauna species. Recent ALOS/AVNIR-2 satellite images were used for developing the landcover maps. Object Based Image Analysis (OBIA) technique was performed for the satellite image classification based on the ground truth data collected during the field surveys, digital photographs and information of the local forest and vegetation types. Processing of environmental layers and other layers was carried out to make them available for Habitat Suitability Model (HSM) computation. Developed forty landcover maps (with eleven major landcover classes), Distance from water the water, sighting data and other vector layer were used for Habitat Suitability Index (HSI) computation. Resultant HSI values are ranging from 0 to 1. The HSI values fall into 0-0.4, 0.4-0.7 and 0.7-1.0 classes represented unsuitable, moderately suitable and highly suitable habitat for smooth-coated otter, respectively.