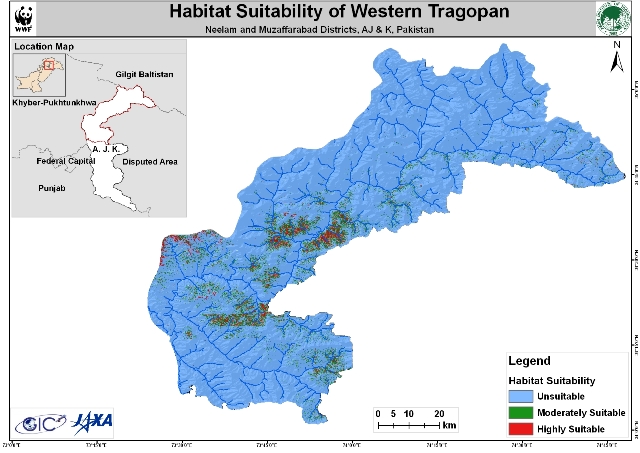 Thirteen parameters were chosen which had a relationship with the habitat of Westen Tragopan. Landcover was identified using Object based classification on ALOS/AVNIR-2 images and a Digital Elevation Model (DEM) was used to extract elevation, slope and aspect parameters.  Modeling was done using only sighting data as presence data. The two ecological niche models GARP (Genetic Algorithm for Rule-set Production) and Maximum Entropy were used to generate the habitat model. There were considerable differences in the outcome of the results calculated by both the models. Maximum Entropy calculated an area of 11,112 ha while GARP found out 62,837 ha area as highly suitable for the habitat of the species. 30,248 and 30,032 ha areas were found out to be moderately suitable respectively in Maximum Entropy and GARP.  The remaining area was unsuitable in both the models.