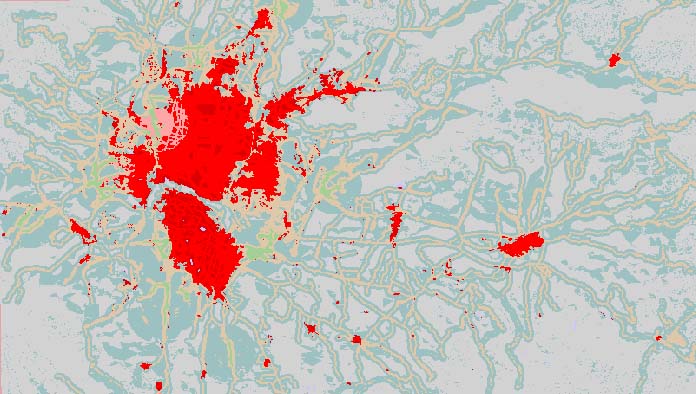 The main objectives of this project were 1) to update land use map of Kathmandu valley using remote sensing and GIS tools and techniques, 2) to analyse changes in urban areas, and 3) to develop urban growth model for predicting future urban growth. Land use maps were prepared for three years in 1988, 1997, and 2001 using satellite images of Landsat-TM, ADEOS, and Landsat-ETM+ respectively.

Several image processing techniques (RGB Composite, Principal Component Analysis (PCA), Normalized Difference Vegetation Index (NDVI), and Colour Normalization and supervised/unsupervised classification methods were used and their performances were evaluated based on the accuracy assessment and agreement with the actual trend of change in land use changes. It was found that the supervised classification method (Maximum Likelihood) applied for the RGB composite images gave satisfactory result with maximum overall accuracy of 92% and overall kappa statistics of 0.79. In general, there was an increasing trend of urban land use observed from 1988 to 2001. Agricultural lands were decreasing in the valley due to conversion to urban areas. Wetland areas showed a decreasing trend. However, forest cover was not decreasing in the Kathmandu valley perhaps due to its protected status as well as a successful community forest programmes.

Urban growth prediction model was carried out using a rule-based model. The model predicts the urban growth on the basis of probabilities of growth of various regions through weighting, assigning suitability scores and creation of exclusion and urban gravity masks. Subsequent mapping of chronologically ordered growth will be achieved through reclassification of high probability areas.