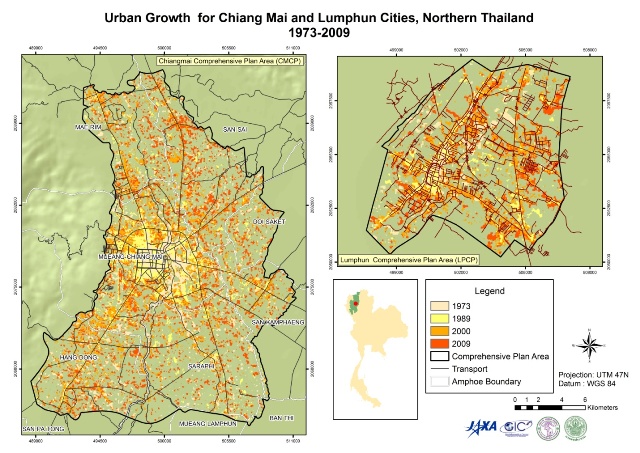 Chiang Mai–Lumphun Valley is one of the most developed area in Thailand. It has been undergoing a rapid urbanization during the last 20 years and Chiang Mai and Lumphun are most likely become twin cities in the near future. Urbanization process plays a significant impact on the environment, particularly on the environmental quality of the region.

To address the problem a project was implemented with the following objectives; 1) To apply SLEUTH cellular automaton (CA) model for mapping spatial and temporal dimensions of urban growth and land use change in Chiang Mai and Lumphun cities from 2010 to 2030, 2) To assess the impact of urbanization and land use changes on Environmental Quality Index (EQI) based on predicted results. The integration between SLEUTH and EQI is the primary framework for forming sound policies in guiding environmentally sustainable growth.

The overall methodology consists of two parts; 1) SLEUTH model and (2) EQI model that integrates land use predictions from SLEUTH model. In SLEUTH model, the main steps for modelling are calibration, prediction and validation. Lee-Sallee scores were selected to form the parameter range used in the calibration phases. The highest Lee-Sallee scores determines the growth trends that were used to derive the coefficients for forecasting future land use changes and urban growth patterns in the study area from 2010 to 2030. SLEUTH model simulates growth scenarios in map forms, which can be further used for analysing future trends in urbanization and land use change. Results showed that the urban areas in  Chiang Mai and Lumphun cities are increasing at the expense of agricultural lands.

In the second part of the project, EQI of Chiang Mai and Lumphun cities were estimated. An index-based approach for quantifying changes in environmental quality based on water, air and land use was used. Results indicated a slight improvement on environmental quality in Lumphun area, whereas there was a declining trend in EQI in Chiangmai area.