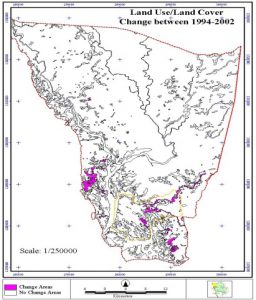 The objectives of this project were: 1) To assess the feasibility of combining RS & GIS technique, as a tool for identifying and monitoring landuse/landcover both in terms of spatial and temporal resolutions, 2) To provide useful information and indicate the trend of changes in landuse/landcover to land management supervisor.
The study area, Mondul Seima district is located in Koh Kong province of Cambodia. The exploration of JERS and Landsat TM satellite data in this project was directed towards the detection of land use type at district level, both in terms of temporal and spatial resolutions. Use of remotely sensed data particularly JERS and Landsat TM data was considered a major tool for this study. Unsupervised classification method was used to extract landcover classes from the digital data sets.

This method was used to examine the unknown pixels in the image and group them based upon the number of statistical clusters in the image. Furthermore, supervised classification, (Maximum Likelihood as well as post-classification) was used to detect and classify the landcover for the entire scene. Additionally, NDVI (Normalized Difference Vegetation Index) or vegetation index was used to transform the multi-spectral data into a single image band representing vegetation distribution, where the NDVI values indicate the amount of green vegetation present in the pixel (the higher NDVI values indicate more green vegetation). A comparison of classified data between JERS (1994) and Landsat (2002) indicates that built up, agricultural areas were largely broadened and the forest had decreased. Considerably, the reduction in the forest areas were about 18 km2 (1.43%); built-up areas, agricultural land, bare land increased approximately 8 km2, 7 km2, and 3 km2, respectively. Interestingly, mangrove forest in this area increased by about 29%.