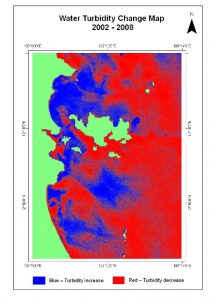 The objectives of this project were: 1) To detect the landcover change including the land and water parts of the study area, 2) To detect the changes in water turbidity and its relationship to the total suspended solids.
The study area, Nha Trang is a coastal city and the capital city of Khanh Hoa province in Vietnam. Landsat-TM image of 1989 and ALOS/AVNIR-2 of 2008 were selected for multi-temporal environmental change detection of the study area, especially in the land area. The images were masked out on the land and sea parts and analyzed for the changes taken place. In the land part, the classification and analysis of the landcover change were carried out.